Wikipedia: "Strawberry Thief is one of William Morris's most popular repeating designs for textiles.It takes as its subject the thrushes that Morris found stealing fruit in his kitchen garden of his countryside home, Kelmscott Manor, in Oxfordshire. To print the pattern Morris used the painstaking indigo-discharge method he admired above all forms of printing. He first attempted to print by this method in 1875 but it was not until 1881, when he moved into his factory at Merton Abbey, near Wimbledon, that he succeeded. In May 1883 Morris wrote to his daughter, "I was a great deal at Merton last week ... anxiously superintending the first printing of the Strawberry thief, which I think we shall manage this time." Pleased with this success, he registered the design with the Patents Office. This pattern was the first design using the technique in which red (in this case alizarin dye) and yellow (weld) were added to the basic blue and white ground." Strawberry Thief by William Morris seamless pattern, reconstructed from a public domain print, here in a copper brown color.

Strawberry Thief by Morris 2 wallpaper is made of non-woven material. Each panel is 50 cm wide / 19,7 inches wide

Strawberry Thief by Morris 2 wallpaper can be customized for your wall. You decide the exact size and how you want to crop it.

Production uses eco-friendly inks and the material is PVC free

How to measure your wall

All you need to to is to measure the width and the height of the complete wall. We always produce your wallpaper in the exact measurements you specify when ordering, so we recommend you to add 5 cm (2 inches) to the measurements, both width and height. For tips on measuring different wall types please see the cases below.

Measure the width and the height of the complete wall. Please double check to make sure you get it right. We always produce your wallpaper in the exact measurements you specify when ordering, so we recommend you to add 5 cm (2 inches) to the measurements, both width and height.

Measure the wall on the highest and widest point, ignoring any slopes. The mural will be printed and delivered as a whole rectangle or square and the sloped part is cut away during installation. We recommend you to add 5 cm (2 inches) to the measurements, both width and height.

Measure the wall on the longest part in both with and height. The mural will be produced as a whole rectangle or square and the sloped part is cut away during installation. We recommend you to add 5 cm (2 inches) to the measurements, both width and height.

Walls with doors, windows or other obstacles

Measure the width and the height of the complete wall. All obstacles will be cut out during installation. We always produce your wallpaper in the exact measurements you specify when ordering, so we recommend you to add 5 cm (2 inches) to the measurements, both width and height.

Measure the width of each of your walls and combine these measurements into one when ordering. Add 5 cm (2 inches) per wall as a safety margin. Then measure the height. Always start from the highest point and also add 5 cm (2 inches) to that measurement. You don't need to order the mural as two separate parts.

As with other sloped walls, please identify the highest and lowest point of the wall when measuring the height. The same goes for the width. All sloped parts will be cut away during installation. We recommend you to add 5 cm (2 inches) to the measurements, both width and height.

1. Make sure the surface is smooth and clean

Remove any old paint or wallpaper that is coming off. Clean the surface and apply filler where necessary. If the surface is porous, please apply a primer/mist coat or prepaste before papering. Porous surfaces include skimmed walls, walls with old wallpaper, particle board or similar. If you hang our premium murals on a dense surface that does not absorb moisture, it may take several days for the paste to dry, as our premium papers are not as breathable as our standard ones. You should also prime the surface if it has bright colours that could show through the wall mural.

2. Make up the wallpaper paste provided

Fill a clean bucket with 4 litres (1 US gallon) of lukewarm water and slowly add the paste powder while stirring briskly. Leave the paste to stand for 5 minutes and stir again. The paste is now ready to use. The paste should be nice and thick, so don’t use more than 4 litres (1 US gallon) of water when mixing. If you do add more, the wallpaper may not fix properly. One bag is enough for around 20-22 m≤. If you are using ready-mixed wallpaper paste, use a paste for non-woven wallpaper or one for woven wallpaper with <20% dry content.

Before hanging, make sure no panels are missing and none have any defects or damage. The panels are numbered at the top in the order they should be hung. Hang from left to right.

2. Make sure the panels are hung straight

It is vital that the first panel is hung straight. It is a good idea to draw vertical markings one panel width (50 cm) in from the corner using a spirit level, a measuring tool and a pencil. Use the markings as a guide to hang the rst panel. Make sure the markings are faint so they don’t show through the wall mural.

3. Apply the paste directly to the wall

Use a roller or a brush. It’s important to cover the whole area with paste – an unpasted spot will create a blister in the wall mural. Apply the paste approximately one panel width in advance.

4. Hang the panels edge to edge

The panels should not overlap. Take care to press the panels together firmly at the seams – use a seam roller for the best results. Be careful to match up the pattern with the next panel, and avoid getting wallpaper paste on the front of the mural as this will show when it dries. Note: Avoid harsh folds as this may cause cracks in the print.

5. Smooth down the panels from the ceiling to floor

Use your hands or a wallpaper brush, starting from the middle and smoothing out towards the edges. Any small bubbles and folds will disappear once the wall mural has dried. If there are any spots of paste on the front of the wallpaper, use a damp cloth or sponge to remove them, but avoid rubbing.

6. Trim off any excess paper

Once all the panels have been hung, trim off any excess paper using a trim guide and a sharp knife.

Sit back and enjoy your new room!

Free shipping with UPS
4-6 business days.
We ship all over the world.

All our wall murals are printed with Happy Mattic™, our new soft and non-reflective matte finish. The material adds an exclusive look and touch to your walls.

Happy Mattic Peel&Stick™, is our new self adhesive wallpaper. Same exclusive look and touch as our paste the wall quality, just a new easy way to wallpaper your home. 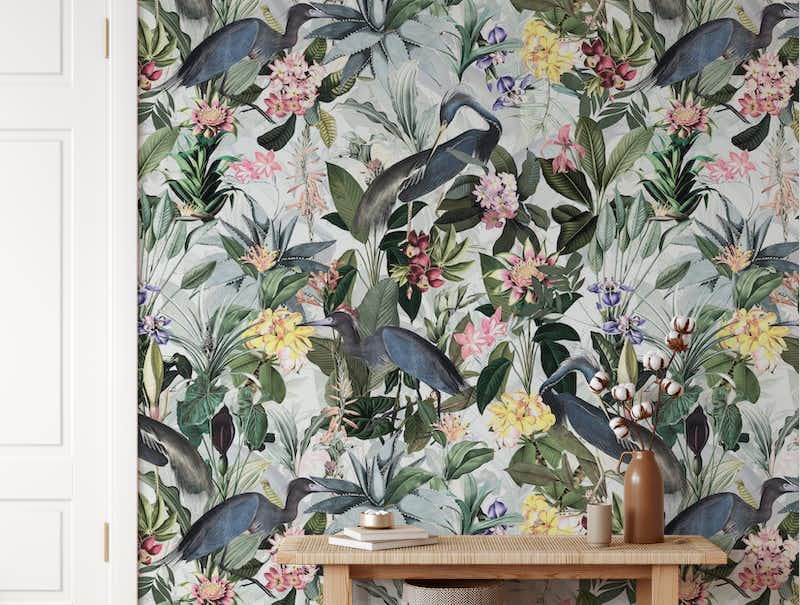 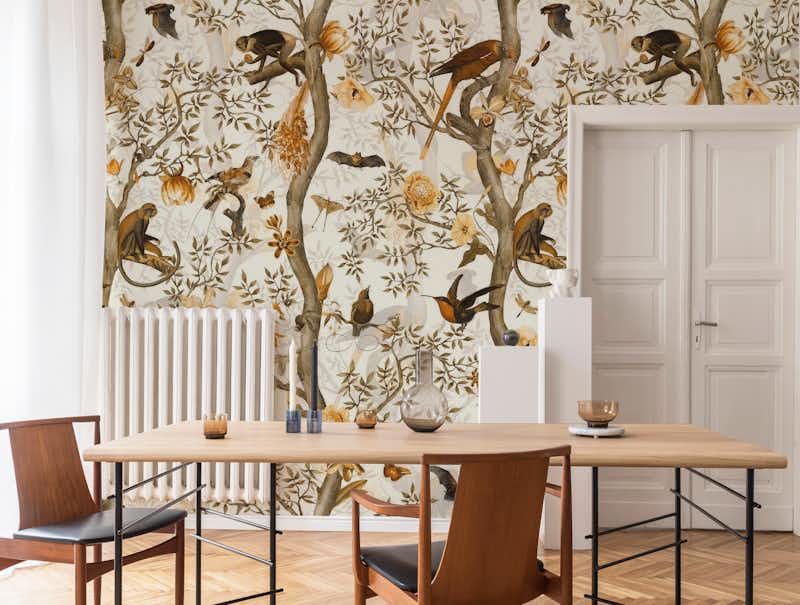 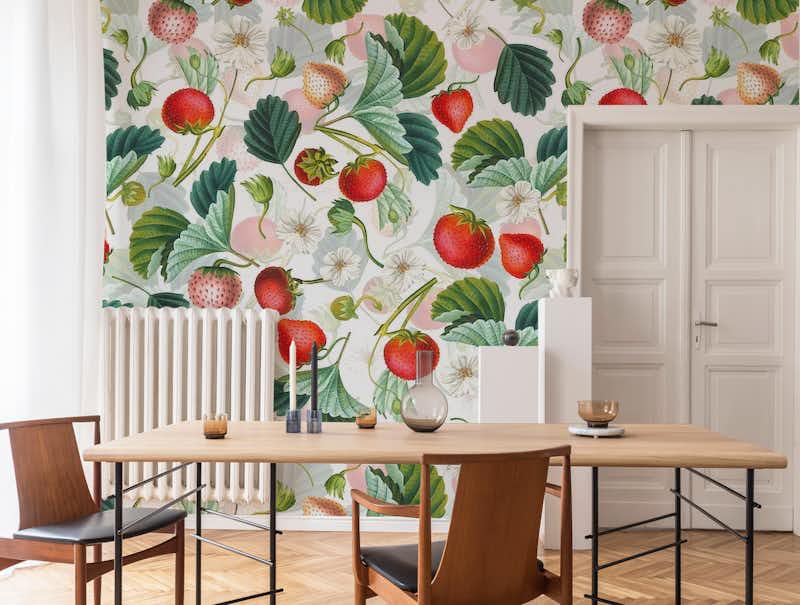 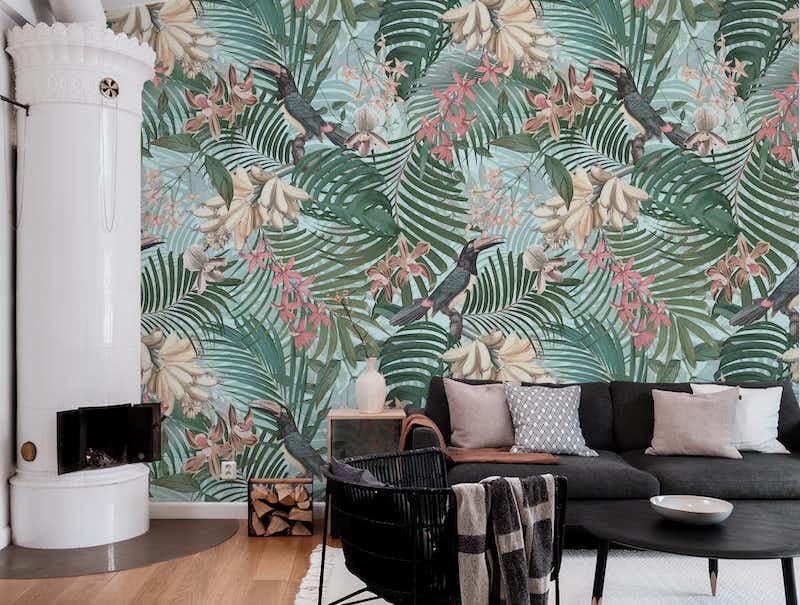 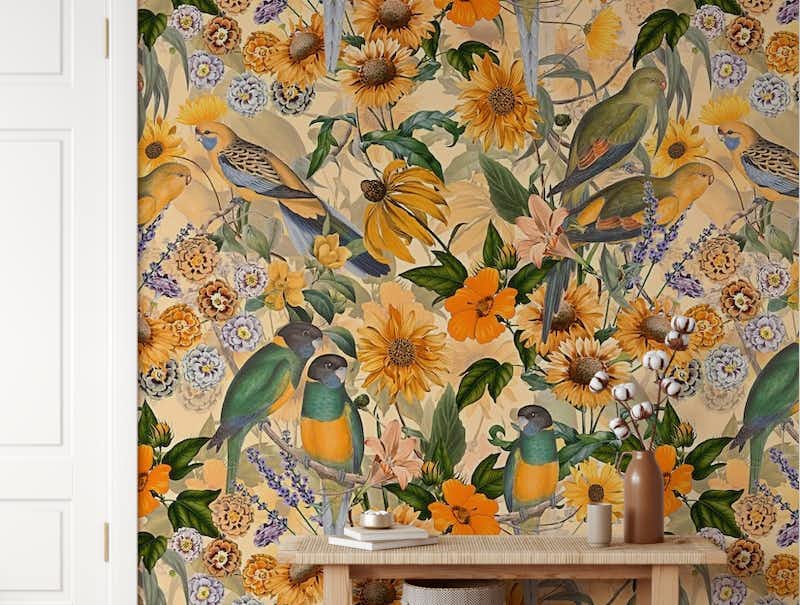 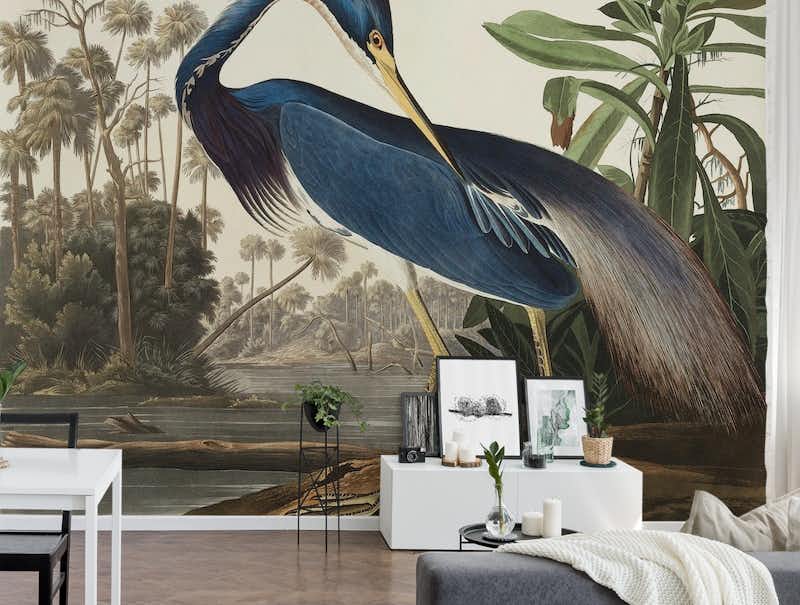 As a customer you can feel 100% secure when shopping with us. We’re a Swedish company with years of experience of selling wall murals online. Choose from a wide range of sensational designs, all carefully selected and printed to order.

Happywall uses cookies to give you the best experience of our website and for marketing and statistical purposes. You can check which cookies are saved in your browser at any time under "Settings".